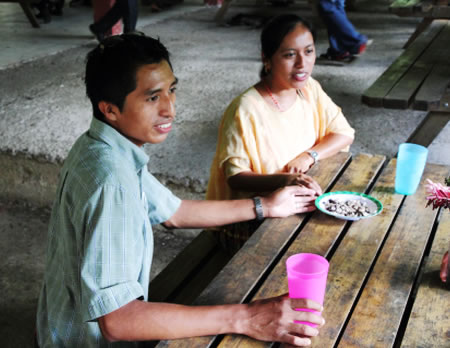 The son of a subsistence farmer who never went to school, Valeriano Chub grew up in a one-room hut with his nine siblings in the village of Quebrada Seca. He had to hike two hours to school as a child, but he managed to finish sixth grade and get into Ak’ Tenamit. He graduated from the Fr. Tom Moran Education Center in 2008 with a degree in sustainable tourism, and went to work at Ak’ Tenamit as a tutor.

He had a lucky break in 2010, when an American tourist who visited Ak’ Tenamit invited him to spend a year in Kentucky, where he attended Murray State University. He then returned to Ak’ Tenamit, where he teaches English and a class on proposal writing.

Valeriano’s older brother, who graduated from Ak’ Tenamit in 2006, works for Guatemala’s national parks service. Both brothers send money to their parents every month, and Valeriano gives money to his younger sister, who is studying nursing. He says that he was offered a job with an oil company that has wells in eastern Guatemala, but he turned them down because he wants to give something back to Ak’ Tenamit.

“Ak’ Tenamit is the only option in this area. If it wasn’t for Ak’ Tenamit, I would probably be married with two or three kids now,” Valeriano said. "To study at Ak’ Tenamit is the most wonderful thing that could happen to a young Q’eqchi Mayan. We come here with no knowledge, and we leave with the knowledge we need to develop our country. More than 200 students want to enter Ak’ Tenamit next year, and I wish we could accept them all, but I don’t think we have enough room and books and money.