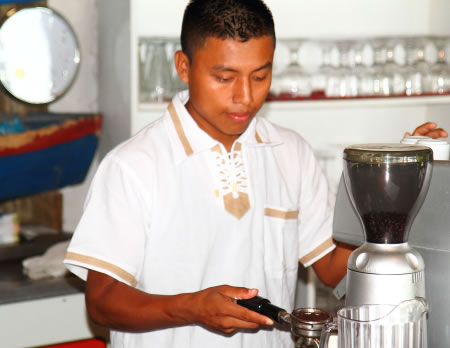 Raul grew up with five siblings in a one-room, thatched hut in the village of Cerro Blanco. His father is a farm worker who spends months at a time on banana plantations. Raul was lucky enough to study at Ak’ Tenamit, and as a student, he worked as an intern at Villa Caribe in 2009 and 2011. He was hired by the hotel as soon as he graduated. “Graduation was on November 25 and I started work on November 26.

He spends six weeks at the hotel, and two weeks in his village every two months, when he helps his parents and his community in a variety of ways. He and other Ak’ Tenamit graduates wrote a proposal that the villagers presented to an oil company operating in the region to fund a communal chicken farm, and another proposal to the local municipality for the construction of a potable water system.

“I’m very happy to have this job, and to be helping my family and my community,” he said. "Twelve kids from my village have graduated from Ak’ Tenamit, and there have be a lot of changes there in recent years. Now all the children finish school, and parents understand that education is important.”

Raul explained that he purchased an electric generator for his family – Cerro Blanco doesn’t have electricity – so that his younger siblings can study with electric light at night. When he was a little boy, his parents often didn’t even have enough money to buy pencils and paper for him. Now he purchases clothing and school supplies for his younger siblings.

“My younger brothers and sisters now have all the school supplies they need when they go to school,” Raul said.

He explained that he also gives money to his younger brother, who is studying sustainable tourism at Ak’ Tenamit. And he trains students from Ak’ Tenamit when they do their internships at Villa Caribe.

“We have to help other young people so that they can get ahead as I have. Every child has a dream,” he said.