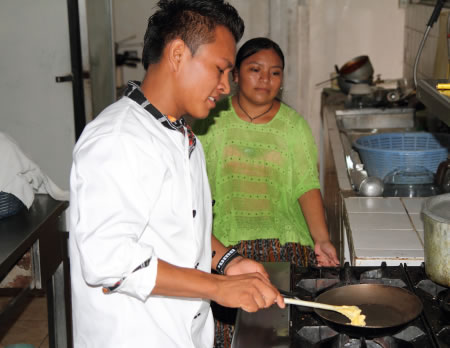 Feliciano Xol grew up in Blue Creek, a small village near Guatemala’s border with Belize, with his five brothers and sisters. His father is a subsistence farmer. Two older kids from his community studied at Ak’ Tenamit before he did and convinced him it was a great opportunity. He graduated in 2011 with a degree in sustainable tourism and now works as a cook at the Hotel Villa Caribe, in Livingston.

“I’ve loved cooking since I began working at Bugamama as a student,” Feliciano said. “It was my dream to have a job like this. I’m very happy to have achieved this, and my parents are very proud of me.”

His brother, Andres, also graduated in 2011, and is now working as a cook in a restaurant in the port town of Puerto Barrios. The two of them took out a loan to purchase five cows that their father is raising on his farm.

“Once we pay off the loan, we want to fix up our parents’ house,” he said.

Feliciano gives more than a third of his salary to his parents and his younger brother, who is studying at Ak’ Tenamit. He also helps his community in varied ways during the week of each month that he spends at home.

“Seven young people from Blue Creek have graduated from Ak’’ Tenamit. All of them have jobs and they are all working to improve our community,” he said.