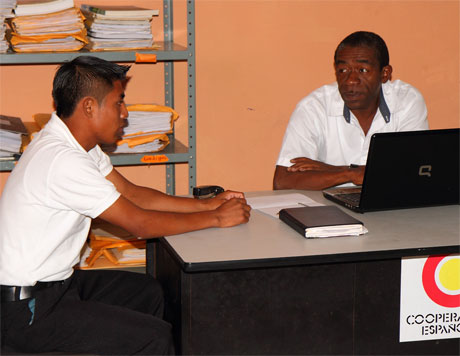 As part of his senior year at Ak’ Tenamit, Bernardo Caal did a two-month internship at the Municipality of Livingston, where he worked for the planning department on a project funded by Guatemala’s Ministry of Development. He worked as part of a team of four that conducted a census of the Q’eqchi Maya communities in the municipality that will be used in the allocation of government funds.

According to Oscar Gamboa, the Director of Planning at the Municipality of Livingston, Bernardo made a significant contribution to the census.

“Bernardo was able to contribute because he speaks the language, he understands the culture and the reality of the communities. Somebody from a city can do this kind of job, but they won’t do it as well as one of the (Ak’ Tenamit) students.”

Gamboa explained that seniors from Ak’ Tenamit have been done internships in his department in the past, and he has always been impressed by their ability and attitude.

“My impression is that Ak’ Tenamit is a very good organization,” he said. “There have always been professional programs, but none of them are oriented toward rural areas like Ak’ Tenamit is.”